Allison Travers is in love with two men. Two! Quinn and Porter are both irresistible, and making a choice between them seems impossible. But she fears she’ll lose the chance to decide when a malicious man seeks to force her into marriage with him by spreading rumors painting her as a woman with loose morals.

Quinn and Porter aren’t about to buy the lies. They love Allison, and what’s more, they both want to marry her. Allison, unaware that one woman for two husbands is the way of the Bridgewater men, soon learns of their customs. And she learns something else as well: once they track her down, these two handsome cowboys will never let go of the woman they plan to make their Christmas Bride.

Emily Woodhouse is a penniless, homeless widow thanks to her recently deceased husband. His gambling ways have placed her in a desperate situation. Faced with working off his debt in the basest of ways, she chooses instead to accept Tyler and Xander’s unconventional marriage proposal. She won’t be marrying one man, but two.

Tyler and Xander know instantly that Emily is the one for them. Not only does the widowed young woman rouse their protective natures, she knows of their customs regarding a two husband marriage. Despite the fact that Emily needs the safety they can offer, she isn’t eager to remarry. She might be reluctant, but they will show her what it will be like with two men to cherish, protect and possess her.

But the past catches up with them in the most dangerous of ways. Only in facing the past can they forge a future together.

Being the daughter of a Butte copper king won’t buy Mary Millard happiness, especially when she discovers her father’s plan to marry her to a cruel man. Desperate, Mary makes an arrangement with a man she meets on a train: pretend to be my intended so I can delay the inevitable. But little does she know it isn’t one man who will save her, but two.

Parker and Sully know the second they meet a beautiful passenger on the train to Butte that she will be their bride. They expected to court her properly, to acclimate to the unusual custom of being the wife of two men. Instead, she turns to them with an insane scheme to protect herself from a man they know to be anything but kind. But a fiancé won’t protect her from a bad marriage. Only a husband can do that.

When Mary weds her Bridgewater men, she learns that while she has two big cowboys to protect her from her past, it’s possible she has the power to save them right back. 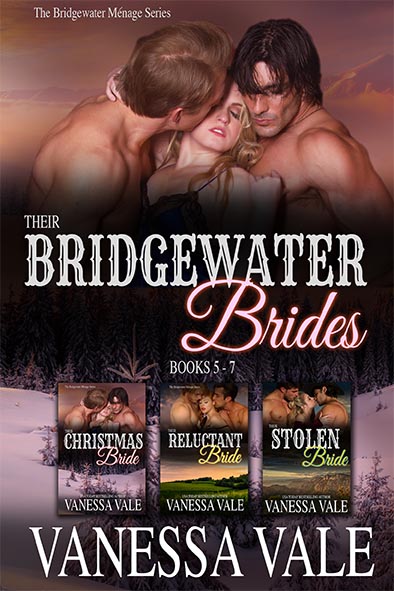