When Abigail Carr returns to Bridgewater after long years away at Finishing School, Gabe and Tucker Landry will not be dissuaded from the only woman who’s held their attentions—and affections—for years. They’re done waiting. When Abigail claims she must return to Butte, and to her fiancé, Gabe and Tucker refuse to give up so easily. Since she doesn’t have a wedding band on her finger, nor love in her heart, they consider Abigail free for the taking. And seduce her they do…right home to Bridgewater, where they not only marry her, but claim her body in the most sensual experience of Abigail’s life.

But Abigail knows that a future as a wife and mother is not possible, not for her. She only came home to save a friend’s life, and she dare not stay. If she doesn’t return to Butte in the next three days, her best friend will die. And no matter how much Abigail wishes she could stay, and be the wife Gabe and Tucker deserve, she must save her friend. The cruel criminal who threatens her friend will not hesitate to kill anyone important to Abigail, including her new husbands.

Abigail will make a hard choice, and save them all…no matter the cost to herself or her heart.

Young, beautiful and idealistic, Tennessee Bennett longs to marry, but only for love. Unfortunately, her father intends to marry her off to the first wealthy man who will have her in order to pay his gambling debts. When his plan takes a murderous turn, Tennessee finds herself alone and penniless on the streets.

Best friends James Carr and Jonah Wells have watched, and wanted Tennessee for two years. Gentleman to their bones, they have done the right thing, waiting for her to grow into a woman old enough to wake to their touch. But when he discovers Tennessee is in danger, James knows they’ve waited long enough. The rebellious woman will be claimed and awakened to passion by not one husband, but two.

The Bridgewater way of one woman marrying two husbands is unknown to Tennessee, but the heat between them is undeniable. She learns that her men will do anything to protect her. But protection—even passion—is not love, and Tennessee is not willing to give up the one thing she truly needs in a marriage.

Can the three of them discover what truly is at the heart of their marriage before it’s too late?

The safest place for an outlaw to be is in the arms of the sheriff.

Grace grew up in a family of outlaws, wild and reckless. The sheriff’s intent on justice, but one look at the gun toting, pants wearing woman and he knows she’ll belong to him. To Charlie, too, for the men at Bridgewater claim, and tame, their bride together.

Do they really know the woman they’ve wed?

While they might strip her bare, she’s still hiding plenty of secrets… secrets that might kill them all. 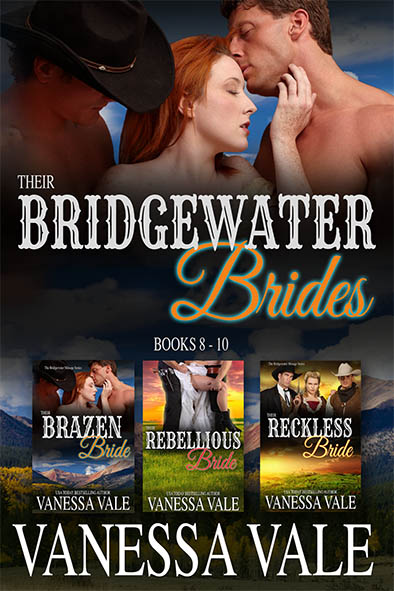